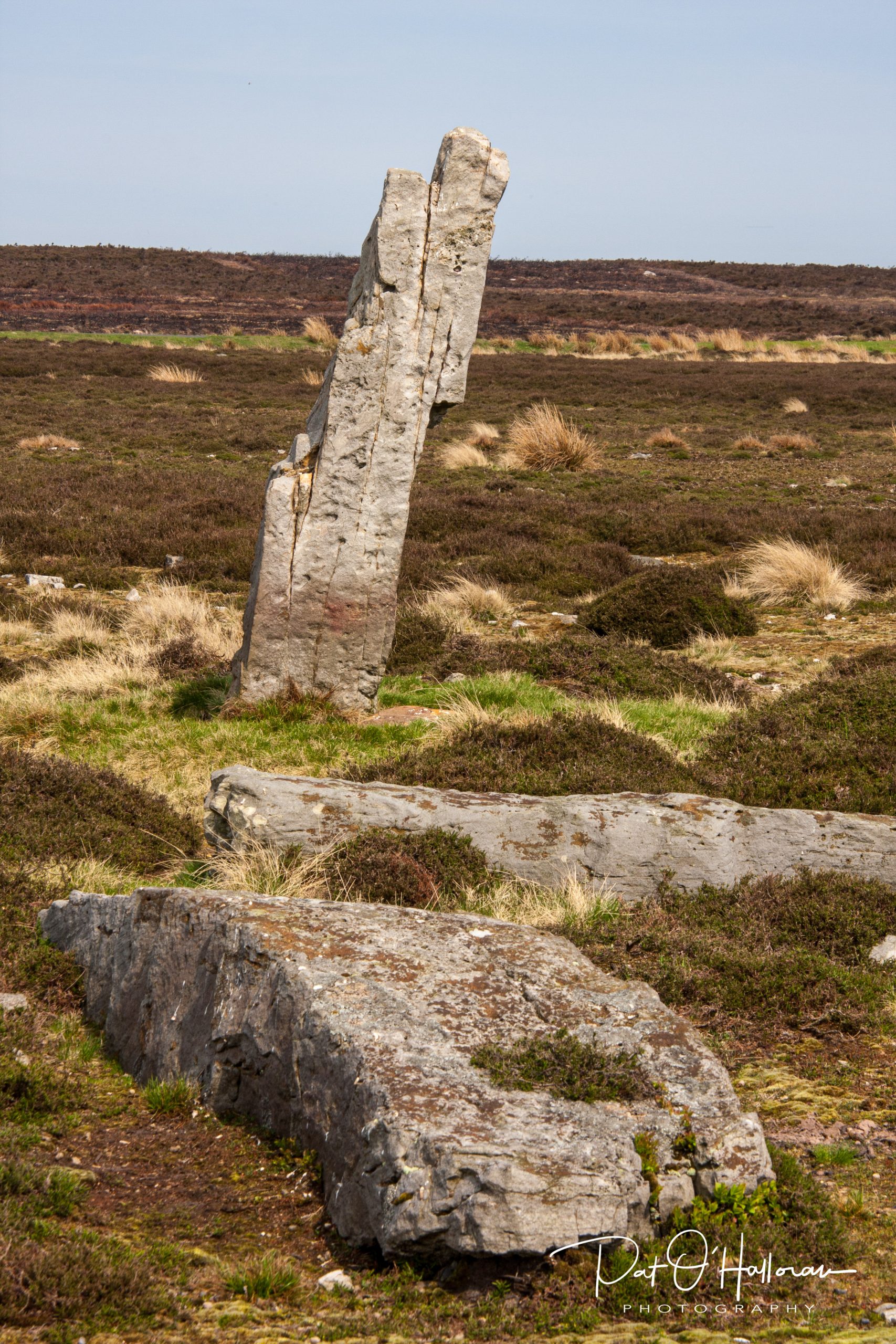 The North York Moors are littered with stones, some of them naturally occurring and others that have been moved and shaped by human hand for one purpose or another. Often they may have been repurposed making it difficult to be sure of their original use and even location.

In this post I intend to look at just a few of those which the human hand has played a part and I hope to give some flavour of the variety of stones and uses that exist on the moors. As always I encourage those interested to get out on the moors and see them for themselves, most of those shown below are fairly easy to access. I apologise for the quality of some of the photographs, they are scans taken from old prints of mine, but they are the best I have at present.

I will start with some stones that, as far as I know, have not been reused. These are known as the High Bridestones and are found just by the side of the road leading from the main Pickering to Whitby road down to the village of Grosmont. There are several stones scattered over quite a wide area. Unfortunately, many of them have fallen and it is difficult to decide what their original positions and pattern may have been. The most well known expert on stones in the UK, Aubrey Burl, thought they were two ruined four-posters [1]. Four-posters are, as you may imagine, four upright stones forming a roughly square configuration. Of the 250 stone circles identified in England only 22 are four-posters, so they are not at all common [2]. This has always puzzled me as there are many more than the eight stones required for a four-poster, indeed Elgee [3] identifies at least 14 stones in the formation and he thought there was two stone circles plus further outlying stones. More recently there has been a theory proposed that it was in fact a stone circle with an avenue leading from it [4].

A little further down the road to the southwest lies another formation of stones, known as the Low Bridestones they are much lower and more difficult to spot. These are often referred to as a stone row. I was once given a document that described how these stones, in excess of 86 of them, were originally used as a calendar. However, Elgee [3] says they are the remains of field walls but I find this hard to believe. They have never been fully investigated and although they are both listed sites Historic England hold very little information on either of the Bridestones formations.

Another stone circle is known dramatically as the Druid’s Circle but rather plainly in official documents as the stone circle on Standingstone Rigg. It appears to be quite a jumbled site with fifteen stones forming a circle of about 8 metres. It originally surrounded a burial cyst , or possibly two, which have been excavated in antiquity.

There were thought to have been 24 stones in the circle originally but some have been removed to be used elsewhere or scattered around. Four of the original cyst stones had cup and ring marks but these stones are no longer on the site [2]. Of course, the circle was never used by druids but fanciful names are commonly given to historic sites in an attempt to explain their existence.

Another stone circle can be found on Harland Moor. This is a large 18m circle which is now slightly D-shaped but was probably more circular when constructed, the flattening of one side was probably due to hollow trackways running through the site [2]. The stones are set atop a low bank of a few metres width. The whole area is a cairn field and has numerous ditches and hollows; some of these date from a similar time to the circle while others are medieval iron ore pits.

Just because a site is referred to as a stone circle doesn’t mean that it actually is one. The next site is known as the Bride Stones (yes, another one) and is often called a stone circle yet in reality it is the remains of a bowl barrow. It is approximately 10 metres in diameter. The ring of stones would have been kerb stones around the barrow which consisted of a mound of earth and stones. Over the years both the weather and inquisitive explorers have removed the covering, and any contents there may have been, leaving only the kerb stones to view. I remember the walk up here was quite steep but the view was stunning.

Across the other side of the moors, overlooking the coast near Robin Hood’s Bay, lies the Ramsdale circle. It looks more like a triangle at present as only three stones remain but it would have been a circle of around 10 metres in diameter. Little more is known about this circle except that it lies within an extensive area of Bronze age activity including burials and earthworks [2]. Perhaps one day it will be excavated and we can discover more.

I’ll move now to standing stones and the first goes by the wonderful name of Margery Bradley. She sits by the side of the road along Blakey Ridge and an adjacent trackway, though she aligns with neither.

She bears the initials TD one one side which stand for Thomas Duncombe who used the stone as a boundary marker for his estate in the eighteen century but there is no indication the stone has been moved from its original site. The stone is from the Bronze Age and is contemporary with Flat Howe which lies a few hundred metres away in the moors. On the other side there is a benchmark cut into the stone, an indication of further re-use in the modern times. I’m sure you will be wondering from where she got here name, no-one knows. There are, of course, many different tales. She is often grouped with nearby Ralph’s Cross and Fat Betty and represents a nun lost on the moors. One reference says Bradley is a corruption of ‘breadless’ and was a spot where beggars would gather for alms, though as the author points out it is a lonely spot for such an enterprise [5]. There are at least two other stones with the surname Bradley, Jenny and Ginny, so perhaps this makes sense.

The next stones have a romantic tale to explain them too. The legend tells of a deer being hunted across the moors and as they eventually managed to impale the animal it took a huge leap across the heather before expiring and two stones were planted there to mark the length of its dying leap. The stones were thereafter call the Hart Leap Stones.

Whilst this is undoubtedly an interesting tale it is one invented in later years to explain their existence. One stone even bears the inscription ‘Hart Leap’ and the area is also now known as the Hart Leap cross dyke. It was once thought these stones may be the remains of a stone row but know they are believed to be part of the aforementioned cross dyke that stretches out on either side of the road here on Glaisdale Rigg [2].

We move now to further legend and a stone knowns as Old Wife’s Neck, if you look at the photograph it may be clear how it got its name. The area consists of earthworks including three ditches with banks and several standing stones on the dyke. The largest stone is Old Wife’s Neck. This part of the moors is quite isolated now but there is evidence that it was once heavily populated [2].

Another type of stone often seen on the moors are guide stones. As the name suggests these were to aid the traveller in choosing the right path across the heather to reach his destination. Some of these were stones erected for that purpose while others were existing standing stones repurposed. One of the most well known is the Hand Stone

The stone stands close to the modern road just north of Hutton-le-Hole. As the photographs show it points the way to Kirkbymoorside and Pickering and these sides have a representation of a hand carved into them. The north side also has a hand and an inscription pointing the traveler to Guisborough. The south side only bears the initials RW. It is thought to date to around 1720 [2].

The next stone is listed in the official records as a waymarker [2] but I’m not certain that it is. As far as I’m aware it is only known by the name of Traverse Moor stone and is a large slab of stone set upon its edge.

It stands by the side of the road that crosses Traverse Moor on its way from Rosedale to Egton Bridge, it is aligned with the road with its tallest corner to the south so could be marking the way but I just feel it is something other than that. There is little information on the stone. You can just make out a benchmark on the lower right of the stone on this, the west face. Historic England believe it to be eighteenth century and gritstone [2].

Finally I have another stone about which I know nothing, I can’t even remember how I found out about it, maybe I just happened across it whilst out on my travels. It is called the Rokan Stone because this is what appears to be inscribed on its face, or at least ‘Rokan Ston’ is there.

The stone lies alongside the road on Glaisdale Rigg so could be another waymarker however it is not aligned with the road but at right angles to it. It is marked on old maps as ‘Rokan stone’ but doesn’t appear on modern ordnance survey maps nor is it listed by Historic England. What ‘Rokan’ refers to I’ve no idea, perhaps someone reading this can enlighten me.

That concludes a brief tour of a very few of the stones on the moors. There are many more, some of which are probably not listed anywhere, and each one has its story. Perhaps I’ll look at a few more in a later post.

[1] Burl, A. (1995) A Guide to the Stone Circles of Britain, Ireland and Brittany, London, Yale University Press